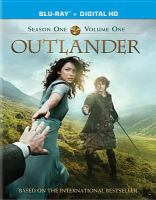 disc 1. Sassenach ; Castle Leoch ; The way out ; The gathering --
disc 2. Rent ; The Garrison commander ; The wedding ; Both sides now.