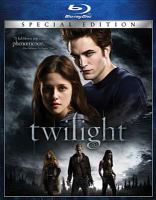 General Note
Title and credits from container.
General Note
Based on the novel "Twilight" by Stephenie Meyer.
General Note
Originally released as a motion picture in 2008.
General Note
Special features: Disc 1: Extended scenes not seen in theatres, audio commentary by director Catherin Hardwicke, Kristen Stewart and Robert Pattinson, plus music videos from Muse, Paramore and LInkin Park. ; Disc 2: A detailed seven-part documentary that gives you the ultimate insider's look at how Twilight was created - from book to script to screen - plus never before seen deleted scenes, a behind the scenes pass to the Comic-Com Phenomenon, and more! ; Disc 3: Exclusive content includes a revealing conversation with Stepenie Meyer, intimate journeys with Robert Pattinson in "Becoming Edward" and Kristen Stewart in "Becoming Bella' and more on the music from the film, including "Edward's piano concert" and "Bella's Lullaby (Remix)" music video by Catherine Harwicke and the documentary, "Music: The Hearbeat of Twilight."
General Note
Includes special features.
Creation/Production Credits
Director of photography, Elliot Davis ; editor, Nancy Richardson ; music by Carter Burwell.
Participants/Performers
Kristen Stewart, Robert Pattinson, Billy Burke, Peter Facinelli.
Description
Isabella Swan moves to gloomy Forks, Washington to live with her father. She begins her junior year in high school and becomes fascinated by Edward Cullen. He holds a dark secret which is only known by his family. To Edward, Bella is what he has waited 90 years for, a true soul mate. But he knows the further they progress in their relationship the more he is putting Bella and those close to her at risk. Edward tries to warn Bella that she should leave him, but she refuses. A new vampire finds it a challenge to hunt Bella down for her irresistible blood. Now, the game is on and James will not stop until she is killed.
System Details
DVD; Dolby Digital 5.1; region 1.
Language
Soundtrack in English or Spanish; subtitles in Spanish.
Language
Subtitled for the deaf and hard of hearing.
Local note
DVD