Night at the museum. Secret of the tomb
(Blu-ray) 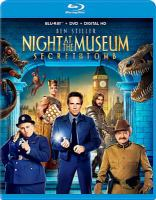