A river runs through it
(DVD) 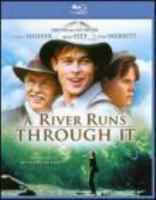