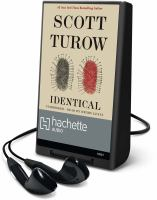 General Note
Title from Playaway label.
General Note
"HDAUDIO."
General Note
Release date supplied by publisher.
General Note
Previously released by Hachette Audio.
General Note
Issued on Playaway, a dedicated audio media player.
General Note
One set of earphones and one AAA battery required for listening.
Participants/Performers
Narrated by Henry Leyva.
Description
"IDENTICAL, based loosely on the myth of Castor and Pollux, is the story of identical twins Paul and Cass Giannis and the complex relationships between their family and their former neighbors, the Kronons. The novel focuses principally on events in 2008, when Paul is a candidate for Mayor of Kindle County, and Cass is released from the penitentiary, 25 years after pleading guilty to the murder of his girlfriend, Athena Kronon. The plot centers on the re-investigation of Athena's murder, carried out together by Evon Miller, an ex-FBI agent who is the head of security for the Kronon family business ZP, and private investigator Tim Brodie, 81, a former homicide detective. The complex web of murder, sex, and betrayal-as only Scott Turow could weave-dramatically unfolds, and the chilling truth is revealed: people will believe what they want to believe" -- from publisher's web site.
Local note
PLAYAWAY
Published Reviews
Reviews from GoodReads
Loading GoodReads Reviews.
Citations
APA Citation (style guide)