How to train your dragon. The hidden world
(Blu-ray / DVD Combo) 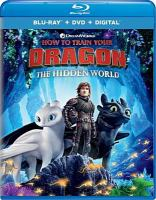