The hobbit. The battle of the five armies
(Blu-ray) 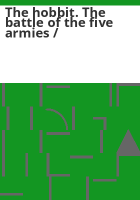