The chronicles of Narnia. The lion, the witch and the wardrobe
(Blu-ray) 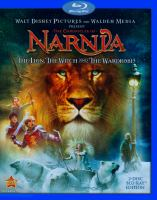